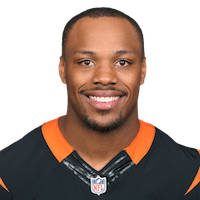 James “Jimmy” Ahern is a healthcare investment banker who has served as managing partner and head of capital markets with Laidlaw & Company since 2010. When he isn’t busy advising and securing funding for private and public companies in the healthcare sector with Laidlaw, James “Jim” Ahern enjoys following his favorite National Football League (NFL) team, the New England Patriots.

Fresh off losing running back Dion Lewis in free agency to the Tennessee Titans, the Patriots announced the signing of former Cincinnati Bengals running back Jeremy Hill. Although he had a disappointing 2017 campaign with only 116 rushing yards and no touchdowns in seven games, Hill was impressive over the previous three seasons.

Originally selected by the Bengals in the second round of the 2014 NFL Draft, the Louisiana State University alumnus scored 9 touchdowns as a rookie and rushed for 1,124 yards. The following season, he accumulated 794 rushing yards and led all running backs in touchdowns with 11. He posted similar numbers in 2016 with 839 rushing yards and 9 touchdowns.